Signs of warmer weather are already here, which means spring must be right around the corner (finally)! As you look towards warmer days, it's the perfect time to get a good dose of home and garden inspiration and start planning out any home renovation projects for spring! From re-designing your cottage to making the most of your outdoor spaces for the summer months, or finishing off a home improvement project, we have everything you need from the industry’s top celebrity guests and homegrown Winnipeg talent alike, to help you make your home goals happen this season.

We’re thrilled to welcome returning HGTV Canada stars Kortney + Dave Wilson of Masters of Flip and Home to Win’s Carson Arthur, and welcome lifestyle expert and TV personality Amanda (Forrest) Aerin for the first time in Winnipeg. Local home and garden experts hitting the stage include organizing expert, Sara Verwumeren of Three Pines Organizing who will inspire you to re-organize your space this spring, and garden experts Alex Augustyniak of West Coast Seeds and Colleen Watson Watson Designs & Landscaping who will help you say hello to spring and get garden ready!

For the first time, Showgoers can explore Cottage Living, a fully designed cottage, right on the show floor, this will have you dreaming up ideas for a cottage overhaul. Showgoers can also get a taste of easy Do It Yourself projects with DIY Inspirations, presented by Rust-Oleum Canada. Local designer J & J Dwellings have fully revamped a space using easy (and budget-friendly) DIY décor projects. You’ll be on your way to becoming a DIY master in no time!

From there, shop and consult more than 280 trusted brands and local companies, all under one roof. Shop from the best local makers at the Shows very own Pop-Up Market. Don’t miss out on the popular Ask a Renovator booth, which is back presented by The Manitoba Home Builder’s Association and Home Décor and Renovations Magazine or The Design Studio presented by Style Manitoba, designed by Adorn Interior Decorar Service and sponsored by Cloverdale Paint where you’ll have the chance to snag a free, one-on-one consultation with a local renovation or design expert. Gather your Pinterest dream boards, paint swatches, and floor plan, and come with an open mind to get the best tips for your time.

From paint colour to furniture, landscaping to functionality, your space is all about you. Join us at the Winnipeg Home + Garden Show from April 4-7, 2019 at the RBC Convention Centre. Buy tickets online and save $2 at www.winnipeghomeandgardenshow.com.The best part? Satisfaction guaranteed - or the price of admission is on us!

We can’t wait to see you there.

Seeking sweet relief on a home improvement project? Look no further than Canada’s most popular designers, gardeners, realtors and home improvement specialists on The Main Stage, presented by the Winnipeg Free Press. Celebrity presenters including Kortney & Dave Wilson, stars of HGTV Canada's Masters of Flip, Carson Arthur, star of HGTV Canada’s series Home to Win and TV personality and lifestyle expert Amanda (Forrest) Aerin will join a line-up of local favourites to deliver insight to up your home and garden game in no time flat.

Aspiring renovators, rejoice: direct access to the city’s top home improvement experts is at your fingertips! Grab your demo plans and blueprints, and drop in for a free consultation at Ask a Renovator. All it takes is 15 minutes - the ideal amount of time to avert disaster and to start making your dream home come true.

Do you suffer from style paralysis? Are you stumped on how to turn your house into a home? The experts will see you now! Swing by for a free 15-minute consultation at The Design Studio, where decorator and designer industry pros will help you nail down your design style, craft a home makeover plan, and offer tried-and-true design advice.

THE LOUNGE designed by Premier

Chill out and treat your taste buds with a stop at the stylish Lounge, where you can sip your favourite cocktail. Designed by Premier, all you need to do is sit back and relax with a drink in hand — you may even be inspired to stay for another round or two!

Is your cottage filled with hand me down furniture and dated decor? Your home away from home deserves a design overhaul both inside and out, just in time for cottage season. Gather inspiration to up your cabin game with new Show feature, Home Away from Home. Step into this fully outfitted cabin and shed while exploring the beautifully landscaped outdoor space which captures the cottage of your dreams. You’ll never want to leave!

Refreshing and renovating a space doesn't have to mean dropping big bucks! Check out how Winnipeg’s own J & J Dwellings revamped a dining nook + living space entirely with creative, approachable DIY projects and Rust-Oleum paints. Get inspired to get creative and take on your own at-home DIY décor and renos without fear.

POP-UP MARKET
Who’s in need of a little retail therapy? We're showcasing a selection of the city’s emerging makers in a special home show pop-up edition. With one-of-a-kind pieces to take any wardrobe, jewellery box or art collection to whole new heights, shopping local has never been so chic. 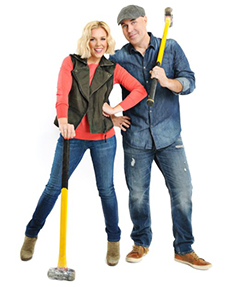 What began as two separate musical careers has become a lifelong partnership for Kortney and Dave Wilson. After trading in their microphones for tool belts, the Canadian-born Nashville couple began flipping houses while raising their children, and in the process, have become two of television’s favorite home renovation experts.

In 2009, CMT Canada debuted a reality show called “Meet the Wilsons”. For two seasons, cameras followed the couple and their family on their house-flipping adventures. Soon after, Kortney and Dave began interacting with their fans as hosts of their own daytime talk show on CMT’s, “Kortney & Dave: By Request”. Since then, Kortney, an award-winning Realtor and design visionary, and Dave, a tireless flipper with a nose for profit, have become the stars of the hit HGTV series: Masters Of Flip. Now in it’s fourth season, the series follows the witty husband and wife team through the mess and stress of renovation, the magic of transformation and the anticipation of enormous profits, as they breathe new life into old, run-down Nashville homes.

The hometown of country music has been experiencing a dramatic resurgence in both new home starts & renovations and house flipping masters Kortney and Dave Wilson are leading the charge; renowned as much for their acute knowledge of the local real estate market as for their artistic design in transforming run-down disasters into stunning one-of-a-kind family homes.

Presenting:
The Best Ways To Make Your House A Home 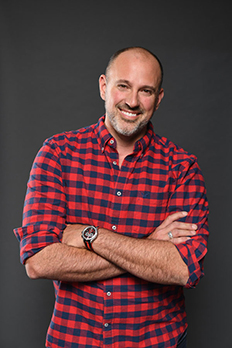 Carson Arthur is a landscape designer and television personality with several shows that can be seen all around the world. Throughout his 15-year television career, Carson teaches homeowners how to raise the value of their homes through outdoor renovations while maintaining a focus on environmentally friendly choices. He is part of the Cityline team; writes a column for the Halifax Chronicle Herald and the Sun media group including the Toronto Sun about outdoor design and appears regularly in a variety of magazines with guest articles. He is the North America outdoor design editor for Outdoor Lifestyle magazine; has a syndicated radio show called ‘Take it Outside’; is the spokesperson for Better Homes and Gardens Real Estate; and the author of the sold out book Garden Designs for Outdoor Living with a new book scheduled to hit the shelves spring 2019.

His credits include; the host of HGTV Canada’s Green Force and Critical Listing; the Gemini nominated Room to Grow on Global, ION and the Discovery network; Better Homes and Garden’s Home, First Home on the Hallmark Channel in the U.S.; and as the gardening expert on HGTV Canada’s blockbusters; Home to Win, Home to Win 2, and Home to Win 3.

See Carson on the Blue Moon Main Stage presented by the Winnipeg Free Press:
Thursday, April 4 at 6 PM
Friday, April 5 at 3 PM
Saturday, April 6 at 11:30 AM

Presenting:
Friday: Redefining the traditional backyard to include balconies, rooftops and shared spaces
Thursday and Saturday: The Breaking point; when property values and eco-friendly choices collide in your backyard. 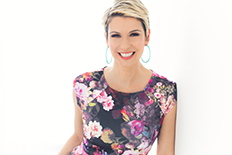 As a Creative Director/TV personality/mom of five, Amanda knows how to keep calm under pressure. Her recent rebrand to Amanda Aerin (formerly Forrest) reflects years of personal growth and business building from design firm to full scale lifestyle brand. After participating in a TV design contest in 2012, Amanda was awarded design expert on CTV’s The Marilyn Denis Show. From there, her creative experiences have grown to include product development, marketing collaborations and luxury design. Amanda speaks publicly on design trends throughout North America and most recently begun speaking candidly to entrepreneurs on the importance of self respect in business, creating a brand that serves others and celebrating creative diversity.

How: Buy your tickets online and save $2 at https://winnipeghomeandgardenshow.com.